Since I was 18 I have loved country music. Look at that picture above, how could you not. I loved country music when in New England when not many people liked It. I endured all my Yankee friends making fun of me saying I liked stupid songs about boots and tractors and dogs dying. Then I told them to take a look at Shania Twain’s new 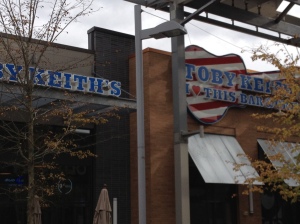 video. Now, Country is popular all over the county, not just the in the south. There was one country music radio station back then now there are at least three that I can think of. Country music is now everywhere and it’s no more apparent than at Toby Keith’s “I love this Bar and Grill” in Foxborough Mass. Toby Keith and Bob Kraft team up for a great experience. I have seen TK in Concert about four times. Chick’s love him and guys want to hang with him and watch a game. His songs have lyric’s like She’s My Little Whiskey Girl and You Ain’t Much Fun Since I Quit Drinkin. With song’s like this you know his restaurant would be cool. And it is. Wicked cool.

What more can you ask for than good-looking women, good food, giant TV’s to watch Football on and alcohol. The place is fairly new and at Patriot Place so I’m sure on game day’s it’s gotta be just

jamming. I have a friend who used to tailgate before every patriots game. Now he says he just goes here before every game. He says its so Much easier. Kraft was such a mastermind building and opening Patriot Place. I wonder if any other NFL Stadiums are following. We went on a Monday for lunch and it was pretty busy. You walk in here and they have some whiskey barrels as you walk in the foyer. Nice entry way. Then you open the other set of doors and are met by a huge open room with a giant bar in the middle, tables to the left and a couple of hostesses in front of you which are easy on the eyes.

We were sat at a high top table to the left of the bar. The bar is huge and shaped like a guitar with an american theme. Toby is a big military / police / fire supporter and on the bottom of the menu he offers a free cheeseburger to active military with ID. It was lunch time so there wasn’t much on the TV’s when we went. The place has plenty of space and looking at the website they have live music in here on the weekends so it probably gets a little crazy.

The menu is mostly Southern Style Cooking. We started off sharing the Fried Pickles. They were just that, Fried Pickles. They were a little spicy with a sauce that complimented them nicely. For the main course I had to go with the Fried Bologna Sandwich. I mean how can you not get that. I thought it was good. It’s a “featured sandwich” on the menu. I got this before in the Las Vegas one and it was basically the same thing. No frills on this baby, fried bologna, cheese, and a little miracle whip dressing and there you have it. A fried Bologna Sandwich.

My girl got the Honey BBQ Crispy Chicken wrap. She like it. Everything was reasonable. I think lunch was 40.00 with a generous tip. I would definitely go back.

All in all don’t expect to go here for a gourmet meal. It’s mostly fried pub food, but it’s good. Go here for the atmosphere, the location, the fun, the music, watch a game. I don’t think you will go wrong.