It’s June on the Vineyard and the nice weather has finally arrived. May and June are two of the best month’s on the Vineyard. All the restaurants are opened, the weather is nice and it’s not too hot. Those dreaded NY people aren’t here yet. You can walk into a restaurant and not have to wait an hour and a half. You can get to the steamship without sitting in twenty minutes of traffic. There are people, but not too many people. You get the point. I decided to take my girl to one of her favorite restaurants on the Island on Friday night. Chesca’s is located in the Vineyard Square Hotel and Suites on North Water Street in Edgartown.

I always say when you dine in Edgartown sit at the bar. All these restaurants in Edgartown are pretty similar. The Edgartown four – Chesca’s, The Atlatnic, Alchemy, and Atria. They are all good. None are over the top great. I say sit at the bar and have some drinks. Enjoy the atmosphere. The more drinks you have the better the meal will taste. You are going to pay for it anyways so it may as well taste like it was cooked by Bobby freekin Flay.

For me, Neil is the main draw of Chesca’s. His drinks and my girls love of the place make it a good choice for dinner. Neil is the maestro behind the bar here. He’s not just some run of the mill bartender. You know the ones they come here for the summer, get drunk every night behind the bar and by September they are sitting in Costa Rica smoking enough weed to kill a small horse. Neil makes incrediblely delicious Mohitos. Mohitos are one of those drinks that every bartender makes them a little different and they taste a little different. I met Neil years ago while he was working at the Atlantic Chop House and was creating his magical mojitos. Since then I have followed him and his mojitos wherever he’s gone. Chesca’s is lucky to have him. It’s not just me either, Neil has plenty of other customers or since it’s Edgartown I may have to call them clients that respect him and have followed him over the years.

Chesca’s only takes reservations for groups of 6 or more so my recommendation is to go a bit early. We got there around 6:30 are there were still some tables available. I have heard people waiting an hour and a half in August though for dinner. Chesca’s gets great reviews on Yelp and Trip Advisor. I think Chesca’s is good. Is it knock your socks off unbelievable? No, I don’t think so. But it’s consistent and good. We started off with a couple appetizers. The Jonah Crab Cakes and the Hot Gorgonzola Dip with Pancetta and Maine Shrimp. Not sure why they have to be Maine Shrimp when we’re on Martha’s Vineyard but whatever. The crab cakes were ok. Kind of plain and not much flavor. The gorgonzola dip was real good. I was starving so I pretty much sucked it up like a vacuum cleaner. It came with little breads for the dip and the bread they serve at Chesca’s is excellent. After that we had some friends who said you have to try the Pizzetta Margherita. Just a fancy word for flatbread pizza. The four of us shared one of those which I remember being excellent and flavorful. It was about as thin as you can get a pizza. Almost paper-thin. Very good. 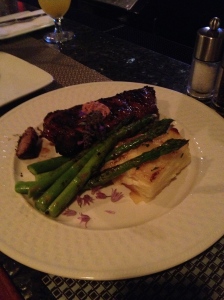 Now the problem was after that gorgonzola stuff I had I was so full. So we decided to actually split an entrée. Something I never do but I was just about running at max capacity here and would have gotten sick if I had eaten much more. We split the Grilled Black Angus New York Sirloin. Seasoned and cooked perfectly but the meat was a little tough. Not the best beef you can buy. It did have a nice flavor to it though. A tasty small little potato gratin on the side with about 5 sticks of asparagus. If I wasn’t so full I would have been disappointed with the portion size. The sides tasted great though.

All and all a fun night with great company and a great bartender. Go see Neil at the bar and tell him mvfoodguy sent you !